by Lizette Twain on January 4, 2015 in Bureau of Land Management

Claims handled by the Bureau of Land Management are not mapped by latitude and longitude, as many maps now use.  Instead, many of these claims harken back to an older form of surveying called the Public Land Survey System (PLSS), a  measurement system that may seem confusing to the uninitiated, but was a great step forward in the time that it was introduced and expressive of the unique challenges the United States of America faced as a young nation.

Origins of the PLSS

Before the PLSS, the United States relied on the British surveying system of metes and bounds.  This system relied heavily on land markers such as trees (which die), streams (which move) and rocks (these can move too, at times). Each survey was, therefore, unique to the particular location. Unusual land patters required incredibly complex descriptions. Overall, it did not scale well.

The PLSS speaks to American history. It was developed to deal with the larger challenge the United States encountered as their borders extended into vast, uncharted wildernesses. With the 1783 Treaty of Paris, England not only recognized US independence, but also their right to land south of the Great Lakes and west to the Mississippi River.  This vast land was yet to be surveyed for American development. Metes and bounds would requre surveyors on the ground to portion out every piece of land. Instead, the US government adopted a more systematic and scalable approach, the PLSS, starting with Ohio.

Most of the original 13 colonies were never plotted out by the PLSS. For the most part, however, central and western states were. While this can be a point of confusion, this makes little difference to most of the BLM managed lands we handle, as they are in states that have been mapped with the PLSS.

How to use it 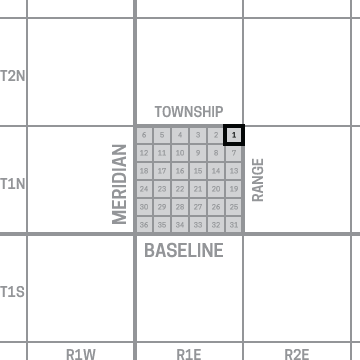 The highlighted section is one out of 36 which compose a township.

When viewing the location information for any claim, you may notice that this location is defined by meridian, township, range, section, and subdivision. These are special terms defined by the PLSS to arrange land into an orderly grid. Similar to how the earth is divided into hemispheres by the equator and prime meridian, blocks of land—such as the state of Arizona—are divided by a set baseline and meridian. These two lines form the base of a grid that is drawn with township lines running parallel to the baseline (east to west) and range lines running parallel to the meridian (north to south). These form (roughly) 36 square mile parcels of land that are also called townships. The townships are, in turn, divided into 36 blocks of land defined as sections. These sections can continue to be subdivided into aliquot parts such as the north west corner of the south east corner of a section, and so on.

Through this structure, prospectors, homesteaders, and other enterprising American’s defined property rights in early America and today’s BLM claims. While we strive to make claim locations as simple and intuitive as possible, it is good to understand the terminologies that are central to every BLM claim.

While much of the US population continues, unconcerned with the inner workings of the PLSS, it is actually one of the major reasons why this country has not converted to the metric system. As observed back in 1876:

“…the measurements of every plot of ground in the United States have been made in acres, feet, and inches, and are publicly recorded with the titles to the land according to the record system peculiar to this country.” —Franklin Institute of Philadelphia

Converting to the metric system is not just a matter of buying milk in liters, but remapping the entire country.